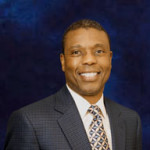 Robert L Waterhouse Jr., MD MBA HSM attended Northwestern University for his undergraduate and medical school education. He completed urology training at Case Western University Hospitals of Cleveland for both residency and a fellowship.  After finishing training, he initially followed an academic career path with the Urology Department at the Mount Sinai School of Medicine in New York, as the director of minimally invasive surgery.  He left academic medicine in 1999 to start an independent practice of urology in the greater Charlotte metropolitan area, which eventually merged with other groups to become the largest urology group in the Carolinas. With his clinical practice, he focused on urologic oncology with special interest in both prostate cancer and the disparity with outcomes for Black men. As Chief Medical Officer for his group, Research Champion, and Advanced Prostate Cancer Center Director, he developed expertise in prostate cancer including initiating and participating in numerous clinical research studies to investigate challenges around prostate cancer. He transitioned to a role in population health with payers in 2017, with ongoing activities to address health care disparities. In addition, he is one of the founders and executive board members of the Consortium on Disparities in Urologic Cancer.