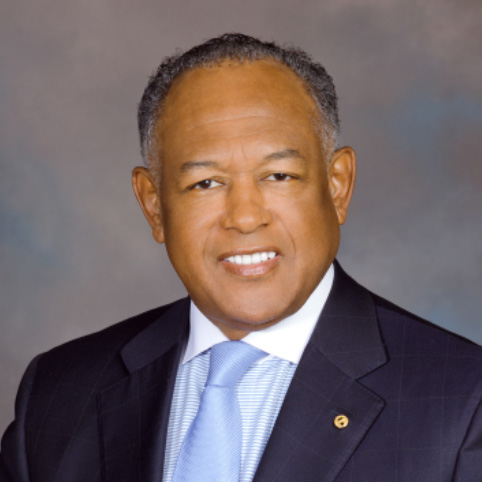 Dr. Dwight C. Jones serves as the Senior Pastor of First Baptist Church of South Richmond, where he will celebrate in November, 47 years of service.  An active public servant, residing in the City of Richmond, Virginia, he has made significant strides and accomplishments in the church, immediate community, the city of Richmond and state of Virginia. Dr. Jones is a prolific orator and visionary leader.  For twenty-five years, he served as Senior Pastor of both First Baptist Church of South Richmond and the St. James Baptist Church in Varina.

While Dr. Jones’ endowment for preaching and teaching has taken him across the country as a guest preacher and lecturer, he has also entrenched himself in the religious, social and political

realms of the City of Richmond. Standing as an ever-present force in working for causes that positively affirm his heritage and beliefs, Dr. Jones’ efforts have impacted the City of Richmond and also the state at large. A diligent advocate of economic empowerment for those who are not in the mainstream, Dr. Jones has been instrumental in effecting change through his various board appointments and other community investments.

Dr. Jones founded the South Richmond Senior Center, the First Baptist Church Child Care Center and the Imani Intergenerational Community Development Corporation—a community-based development corporation committed to the building of affordable housing, revitalization of distressed business areas and business development, as well as workforce initiatives and training. Under Dr. Jones’ leadership, Imani CDC developed a full block of property in the Blackwell community of the City of Richmond, 68 apartments and 23,000 square feet of retail space which has served as a catalyst to bringing businesses back Hull Street.

Dr. Jones was appointed to the Richmond City School Board in 1979 and served as its chairman from 1982-1985. He served in the Virginia State Legislature from 1994-2008, as an honorable member of the House of Delegates serving the 70th district.  During his tenure in the House of Delegates, he served as Chair of the Virginia Legislative Black Caucus.

In 2007, Dr. Jones felt called to serve as Mayor of the City of Richmond and was elected the 79th Mayor of the city of Richmond in November 2008, the second Mayor at Large for Richmond.  Dr. Jones was re-elected in in November 2012.  He focused on “Building a Better Richmond” and successfully led Richmond in laying a strong foundation for a well-managed government, economic growth, building a strong transportation system, creating a sustainable and natural environment and most importantly attacking the city’s 26% poverty rate.

As Mayor, Dr. Jones was dedicated to the cause of making Richmond the premier city in Virginia. During his first term, more than 700 jobs were created, and the city experienced an increase in capital investment of more 981 million dollars. Under his leadership four new schools were built in the Richmond Public School Systems.

Dr. Jones placed Richmond in the history books with the UCI World Cycling Championship which was held in September 2015.  More than 300 million viewers around the world watched as cyclist raced through the streets of Richmond.  Hence, Richmond is known worldwide!